Earning passive income as an investor in single-family rental homes is a dream for many, but also something that can be intimidating to break into.

Awning is a startup that aims to make the process less intimidating through a platform designed to allow individuals to invest in single-family rental homes not just in the cities or states in which they live but in other markets remotely as well. And today, the San Francisco-based real estate brokerage is coming out of stealth with $9.3 million in a seed funding round led by Global Founders Capital.

CEO Shri Ganeshram teamed up with Danaus Chang in 2019 to start Awning after stints as a founding team member at FlightCar and lead product and engineering at Eaze. Prior to becoming an entrepreneur, Ganeshram had dropped out of high school in Texas after gaining early admission to MIT (where he later co-founded FlightCar).

The platform launched in closed access earlier this year, and is today open to investors across the U.S. and Canada. Currently, it connects buyers with listings in three states — California, Texas and Florida. Part of the plans for the new capital is to add new markets to its portfolio in the coming months.

Awning works by using machine learning and data analytics in an effort “to surface the best nationwide single-family rental properties for investors, with estimations of their financial returns.” Awning customers are paired with advisors to determine their investment strategy, and Awning’s local agents “qualitatively” review every property. Those advisors can also help investors secure financing and connect buyers with “vetted” property managers to oversee their properties and manage leasing and day-to-day maintenance.

It’s a similar, but different, model to another startup we covered recently — Mynd, a company that also aims to make it easier for people to buy and manage single-family rental properties, which last week announced it had raised $57.3 million in funding from QED Investors. Unlike Mynd, Awning won’t manage the properties for investors. It is also different in that it is focused on helping individual investors, while Mynd also serves institutions.

Awning’s “advisors” (also licensed real estate agents) curate properties that they believe are the best fit for an investor based on their budget and goals, and using the startup’s proprietary machine learning model, can estimate the rent, expenses, appreciation and potential ROI on every listing on the market.

The platform does this by ingesting all the listings from different MLSes in the various markets, and automatically analyzes each one for returns and risks after an advisor learns about a potential investor’s financial goals.

“Once an investor is ready to move further, they can use our platform to communicate with an advisor and place offers,” Ganeshram said. 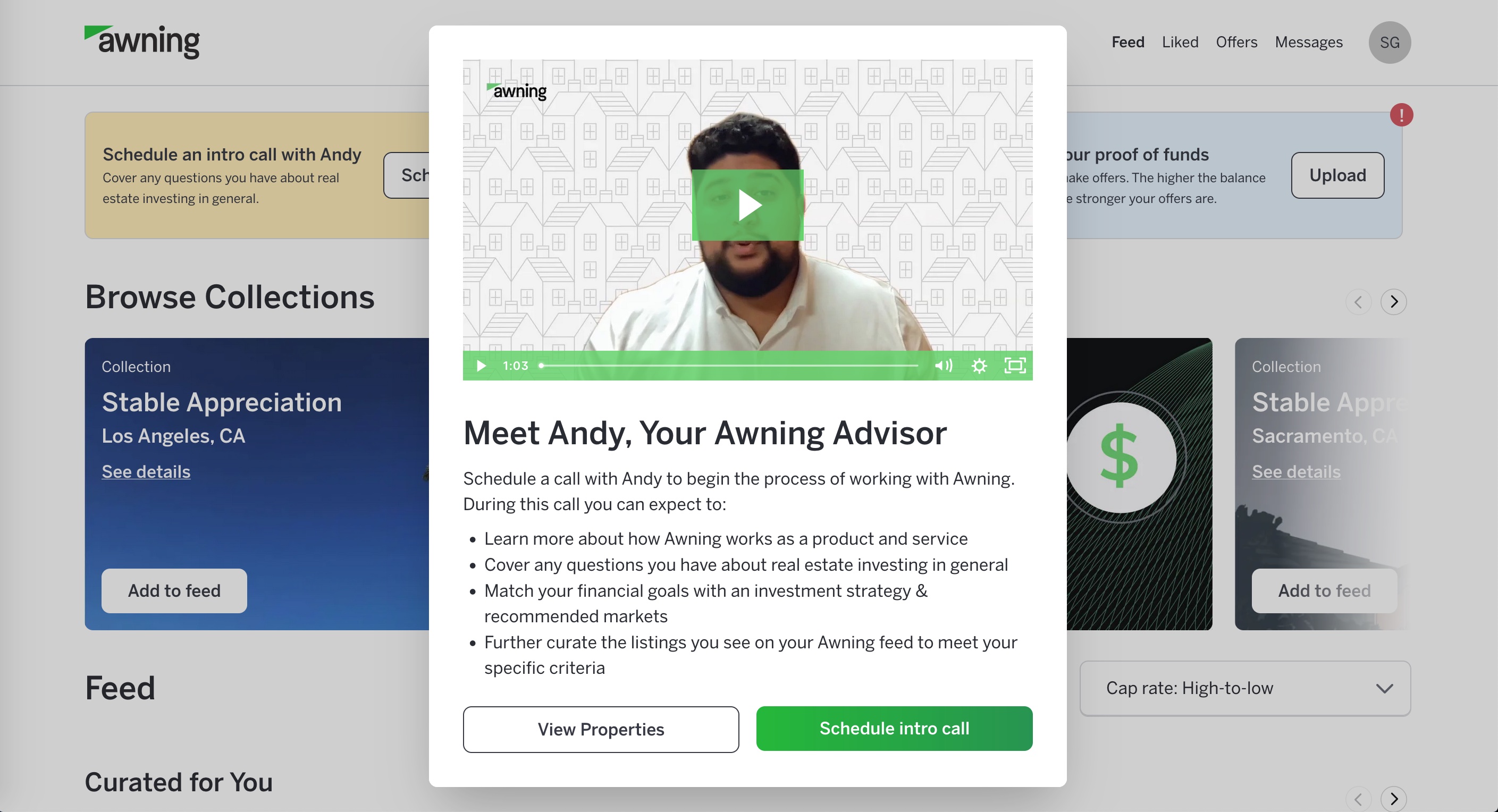 Historically, said Ganeshram, the process to invest in single-family rentals has been “cumbersome.”

“It feels like it’s stuck in the last century,” he added.

Awning’s “strong” human and technology components make it a faster and easier experience, the company claims.

So far, the platform has helped facilitate the sale of $5 million in real estate. It makes money by taking a commission from the seller, just as other real estate brokerages do, and doesn’t charge any additional fees. That commission is typically 6% built into the listing, paid upon closing — with 3% going to the respective agents for the buyer and seller.

Later this year, Awning plans to launch in Florida and Alabama, and then other markets over the next year. Expansion can be challenging because the company must set up a licensed brokerage in each state it wants to enter.

Global Founders Capital’s Don Stalter said his firm has known Awning co-founders “for years” before Awning’s formation, and when they approached his firm about starting the company, he “knew that we needed to lead their first round of financing,” Stalter wrote via email.

Kendrick Kho of Global Founders Capital said he has invested in other real estate investment startups over the past five years, and believed that Awning stands out from other offerings with its focus on individual buyers, rather than institutions. He also likes the company’s approach of  “getting buyers familiar with their potential investments as actual physical houses instead of lines on a spreadsheet.”

Mynd raises $57.3M at an $807M valuation to give people a way to invest in rental properties remotely

“With their product and engineering expertise, they have quickly built a platform where curation, education, and data accuracy are superior to alternatives,” Kho wrote.

He was also attracted to the fact that Awning does not reject the idea of partnering with real estate agents.

“A lot of entrepreneurs in real estate tech believe that human agents are superfluous, but don’t realize that when a buyer in New York City wants to buy their very first investment property and are looking at homes hundreds of miles away,” Kho added, “he or she wants a human agent there to answer questions and be an expert guide on the process.”

Wolt closes $530M round to continue expanding beyond restaurant delivery