Walmart is further investing in technology that will enable shopping via voice and chat with its latest acquisition. The retail giant announced it’s acquiring “select technology assets” from a startup called Botmock, which had developed a set of tools for designing, prototyping, testing, and deploying conversational applications across platforms.

Founded in 2016, Botmock got off the ground just when conversational experiences were starting to be developed. At this time, there was a lack of resources available for design teams. The company says most of its early customers were working directly within platforms like DialogFlow or IBM Watson, for example, which made it harder for them to rapidly test their ideas.

Meanwhile, non-developers were using tools like Visio or LucidCharts to create their conversation flows. Botmock promised a better toolset that would allow teams to avoid blind spots in their design and build better overall conversational experiences. 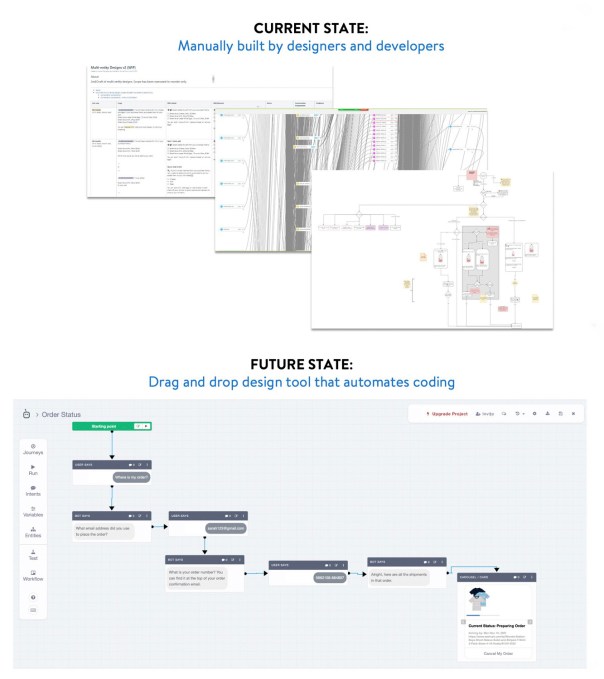 Botmock’s solution offers a drag-and-drop editor for designing a chatbot (or voice bot)’s conversations. The system automatically develops the code in the background as users design their conversation flows. It also helps to handle the specific complexities that were involved with the project — like platform-specific restrictions — while facilitating team collaboration.

According to a recent version of Botmock’s website, its tools were being used by over 50,000 people. It also touted customers across verticals, including large businesses like Nationwide, Accenture, Delta, Bristol-Myers Squibb, Oracle, Viasat, Mercury.ai, Liveperson, BlueRobot, BT, Avanade, and Enbridge.

Walmart, however, intends to use Botmock for what it calls “conversational commerce” — an area of increased investment in recent months.

The company in October announced the beta test of a “Walmart Text to Shop” experience that allows customers to text to make purchases. It follows years of investment in voice-based shopping, which culminated in a 2019 partnership with Google for voice-enabled grocery shopping. Today, Walmart offers voice-based shopping through both Google and Siri, and allows customers to check-in for contactless pickup using their voice.

Surprisingly, however, text-based shopping is only now getting warmed up, Walmart says.

With Botmock, the company says it will be able to build out natural voice and chat interfaces for both its customers and its associates — the latter through the internally used “Ask Sam” app which can answer questions or direct store staff to the location of products, among other things.

“With such a tool we can build natural voice and chat interfaces for our customers and associates faster and deploy them more rapidly,” shared Cheryl Ainoa, Walmart SVP of Core Retail Services & Emerging Technology. “Building seamless interactions for voice or chat is a fairly difficult design problem that requires us to consider all possible conversational flows, which depend on customers’ unique situation and needs,” she explained.

“For example, when a customer is building their weekly grocery cart using their voice, they might say, ‘add milk to my cart.’ The right action and the response to the customer depends on various factors, including if the customer has bought milk in the past, what their preferred type of milk is (e.g., 2% or non-fat, etc.), do they already have some type of milk in their cart, and if so, should we ask whether they want to change the quantity or let them know they already have it in their cart,” Ainoa noted.

In the past, these types of experiences could take months to develop and deploy, but Botmock’s technology will allow it to deploy in days, she added. This, in turn, will help to speed time to market and lower its costs.

Walmart did not detail the terms of the deal, noting only it was acquiring select technology assets.

According to Botmock’s website, however, the team will also be joining Walmart and working to transition its existing customers by helping migrate their data. Its customers will have access to Botmock through Dec. 1st, 2021 and pro-rated refunds on subscriptions are being issued, the website said.

Not even 5G could rescue smartphone sales in 2020